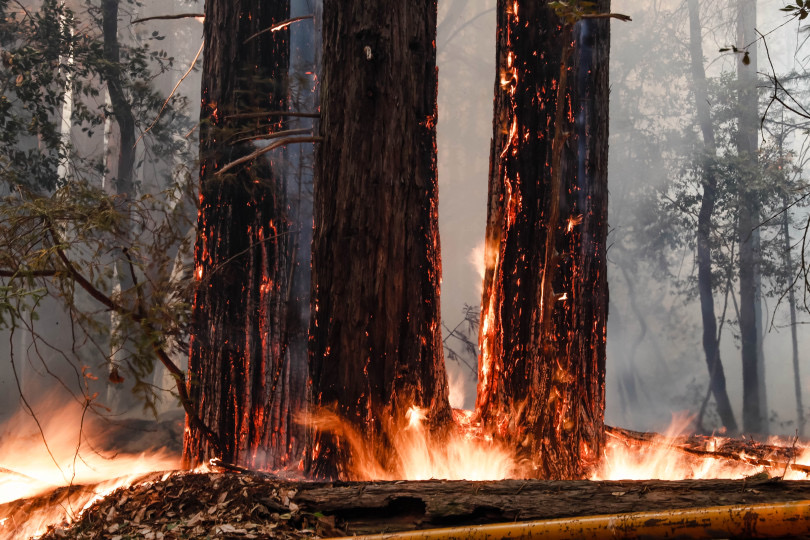 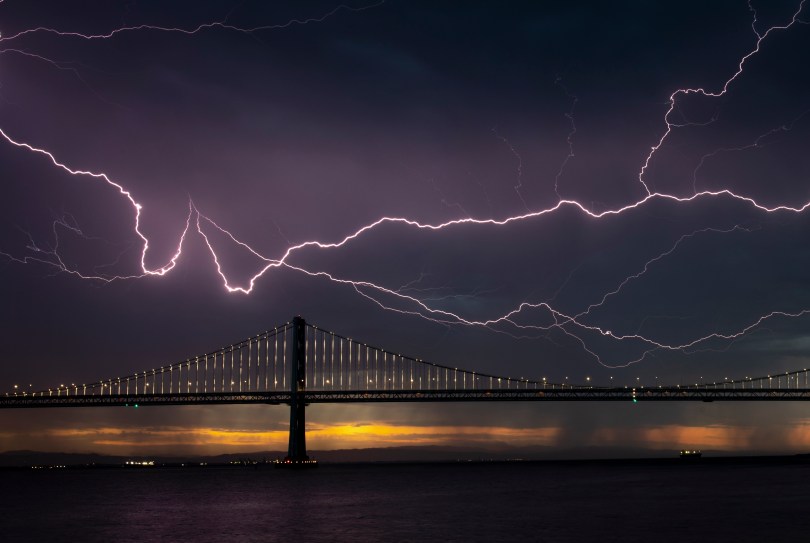 关于森林大火，我看见了不同的说法。有的生态学家认为像红杉这样的树种在进化的过程中适应了像加州这样的山火频发的地域，但并不表明它们必须要山火才能延续下去。更重要的是，近年来由于气候变暖的影响，山火根本不是小规模的、贴着地面的火，而是持续时间长、大范围的灾难，红杉林根本来不及自我修复。
Ultimately, happiness comes down to choosing between the discomfort of becoming aware of your mental afflictions and the discomfort of being ruled by them. -- Yongey Mingyur Rinpoche
Top

The historic fire that roared through the ancient redwoods of Big Basin Redwoods State Park in Santa Cruz County, blackening all 18,000 acres of California’s oldest state park and destroying its historic buildings, has drawn international attention and prompted an outpouring of grief and concern.

But fire scientists who have carefully studied other coastal redwood forests after wildfires have surprisingly good news: Don’t worry. Even though they look terrible now, most of the trees will recover.

Not in 100 years. But much sooner. Amazingly, most of the giant, scorched black trees will begin sprouting green leaves again by this winter, they say, when rains begin. Coast redwoods, the tallest trees on Earth, have the Latin name Sequoia Sempervirens, which means “ever-living Sequoia.” Their breathtaking ability to stand tall in the face of floods, fires and other calamities is how they live to be up to 2,000 years old.

Individual trees at Big Basin today were standing during the Roman Empire. And, the scientists say, they will endure.

A San Jose State University scientist who monitored 667 trees in three areas in the Santa Cruz Mountains after lightning fires in 2008 and 2009 at Bonny Doon, Mount Madonna County Park and Swanton Pacific Ranch found that 88% of the redwoods that burned there lived and were regrowing two years later. By comparison, only 25% of Douglas fir trees survived.

“The redwoods were really resilient. Anything with a diameter bigger than 3 inches basically survived,” said Rachel Lazzeri-Aerts, an instructor in the Department of Environmental Studies at the university.

“Some of those trees looked like little charcoal sticks,” she said. “Within a year they sprouted new growth, new needles. They looked like bright green pipe cleaners. It was really kind of cool.”


Similarly, in the late 1980s, Mark Finney, a graduate student at UC Berkeley, burned 20 plots of redwoods, each about half an acre, in Trione-Annadel State Park in Sonoma County and Humboldt Redwoods State Park in Humboldt County to test their resilience to fire. He burned in spring and fall, and from low to very high intensities, with inmate fire crews standing by.

“We tried our best to kill them and we couldn’t,” he said.

Unlike many other trees, redwoods have cells that lie dormant in their trunks and limbs for centuries, he explained. When the trees burn, the cells sprout new buds. Moreover, their bark is up to a foot thick, and fire-resistant. As long as every part of the cambium, or softer inner layer under the bark, isn’t destroyed, the trees almost always recover from fire, he said. Even if they topple, new redwoods sprout from the same roots.

“These trees are amazing,” Finney said. “Redwoods are an ancient lineage. There are fossils of them from tens of millions of years ago. It’s not the same kind of creature as our other trees. They have lived through a lot.”

“None of this looks that bad to me,” he said. “There’s a lot of scorch in there, but most of these trees are fine. You can see brown foliage on these trees. It doesn’t mean the tree is dead at all. It means the foliage is dead, but the buds underneath the branches and main stem are still alive, and they will probably sprout right back. Most of these trees will do just fine. I know it sounds shocking. If this was a forest in the Sierra Nevada, most of them would be dead.”

Redwood trees burned in the 1991 Oakland Hills fire, he said. Some looked like black telephone poles afterward, but most grew back. A few will be so badly burned in Big Basin at the base that they may topple. But most won’t, he added.

Another researcher who studied four areas in Mendocino County, Big Sur and Santa Cruz after the 2008 lightning fires found the same thing.

“One year later, even large trees where all the foliage was scorched off were covered with a light green fuzz of new foliage,” Ben Ramage, a former ecologist at UC Berkeley, said at the time. “Of trees over 1.5 feet in diameter, maybe only one redwood out of a hundred was killed.”

“These trees are very resilient,” he said. “They can bounce back. But the resilience is being pushed to the limit with this new climate.”

The fire burning now in Santa Cruz and San Mateo counties, called the CZU Lightning Complex Fire, started Aug. 16 during a lightning storm. By Monday night, it had burned 78,684 acres, destroyed 276 structures and killed one person. It was 13% contained.

It has mostly burned redwood forest land. In addition to Big Basin, the fire has made its way through undeveloped parts of Henry Cowell Redwoods, Butano, Portola Redwoods, upper Wilder Ranch and Cascade Ranch at Año Nuevo state parks, in areas with lots of dead brush due to generations of fire suppression. The last time a major fire burned in the Santa Cruz Mountains was 1948, when the Pine Mountain Fire blackened 16,000 acres between Boulder Creek and Bonny Doon.

In 1904, a large fire at Big Basin prompted the New York Times to report that the park “seems doomed to destruction, though hundreds of men are fighting the fires.” But only the eastern third of the park burned. Generations of visitors since have marveled at the 250-foot trees bearing black scars from that fire.

“People are saying on my Facebook and Instagram pages ‘Oh my God, the park is gone,’ ” said Lazzeri-Aerts. “I’m telling them the trees will regrow but the historic buildings and everything in them — the historic pictures, the documents, the exhibits on the walls — can’t be replaced. In the short term, the trees are going to look kind of charcoal-y, but it will all come back.”

我相信红杉林的修复能力，但我关心的是过去几十年来山火的规模越来越大持续时间越来越长，再加上其它的环境破坏，再抗烧的红杉也需要时间来修复。按照人类的time scale，还有时间吗？四月贴的新闻里说：“In the short term, the trees are going to look kind of charcoal-y, but it will all come back.” 树会恢复的，需要十年，五十年，还是一百年？人类还能见到吗？

所谓高等生命则不一定。
Last edited by 唐唐的郁金香 on 2020-08-25 15:20, edited 3 times in total.
Ultimately, happiness comes down to choosing between the discomfort of becoming aware of your mental afflictions and the discomfort of being ruled by them. -- Yongey Mingyur Rinpoche
Top

我相信红杉林的修复能力，但我关心的是过去几十年来山火的规模越来越大持续时间越来越长，再加上其它的环境破坏，再抗烧的红杉也需要时间来修复。按照人类的time scale，还有时间吗？四月贴的新闻里说：“In the short term, the trees are going to look kind of charcoal-y, but it will all come back.” 树会恢复的，需要十年，五十年，还是一百年？人类还能见到吗？

说得就是这个意思。人类能活得到一百岁的不多，不能因为红杉可以最终自我修复就不考虑人类对它们的破坏。山火是自然的一部分，但越演越烈的趋势是人类造成的。
Ultimately, happiness comes down to choosing between the discomfort of becoming aware of your mental afflictions and the discomfort of being ruled by them. -- Yongey Mingyur Rinpoche
Top

好消息。 Some Good News: Many of Big Basin's Ancient Redwoods Appear to Have Survived
云浆未饮结成冰
Top

也就是类似核冬天的情况。火山爆发造成小冰川期是历史上确实发生过的事件。
There was nothing to warn anyone about. The world went on, even as it fell apart, changed irrevocably, became something strange and different. --- "Acceptance" in The Southern Reach Trilogy by Jeff VanderMeer
Top