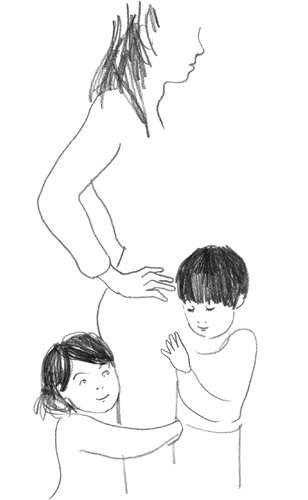 MY MOTHER fought cancer for almost a decade and died at 56. She held out long enough to meet the first of her grandchildren and to hold them in her arms. But my other children will never have the chance to know her and experience how loving and gracious she was.

We often speak of “Mommy’s mommy,” and I find myself trying to explain the illness that took her away from us. They have asked if the same could happen to me. I have always told them not to worry, but the truth is I carry a “faulty” gene, BRCA1, which sharply increases my risk of developing breast cancer and ovarian cancer.

Only a fraction of breast cancers result from an inherited gene mutation. Those with a defect in BRCA1 have a 65 percent risk of getting it, on average.

Once I knew that this was my reality, I decided to be proactive and to minimize the risk as much I could. I made a decision to have a preventive double mastectomy. I started with the breasts, as my risk of breast cancer is higher than my risk of ovarian cancer, and the surgery is more complex.

On April 27, I finished the three months of medical procedures that the mastectomies involved. During that time I have been able to keep this private and to carry on with my work.

But I am writing about it now because I hope that other women can benefit from my experience. Cancer is still a word that strikes fear into people’s hearts, producing a deep sense of powerlessness. But today it is possible to find out through a blood test whether you are highly susceptible to breast and ovarian cancer, and then take action.

My own process began on Feb. 2 with a procedure known as a “nipple delay,” which rules out disease in the breast ducts behind the nipple and draws extra blood flow to the area. This causes some pain and a lot of bruising, but it increases the chance of saving the nipple.

Two weeks later I had the major surgery, where the breast tissue is removed and temporary fillers are put in place. The operation can take eight hours. You wake up with drain tubes and expanders in your breasts. It does feel like a scene out of a science-fiction film. But days after surgery you can be back to a normal life.

Nine weeks later, the final surgery is completed with the reconstruction of the breasts with an implant. There have been many advances in this procedure in the last few years, and the results can be beautiful.

I wanted to write this to tell other women that the decision to have a mastectomy was not easy. But it is one I am very happy that I made. My chances of developing breast cancer have dropped from 87 percent to under 5 percent. I can tell my children that they don’t need to fear they will lose me to breast cancer.

It is reassuring that they see nothing that makes them uncomfortable. They can see my small scars and that’s it. Everything else is just Mommy, the same as she always was. And they know that I love them and will do anything to be with them as long as I can. On a personal note, I do not feel any less of a woman. I feel empowered that I made a strong choice that in no way diminishes my femininity.

I am fortunate to have a partner, Brad Pitt, who is so loving and supportive. So to anyone who has a wife or girlfriend going through this, know that you are a very important part of the transition. Brad was at the Pink Lotus Breast Center, where I was treated, for every minute of the surgeries. We managed to find moments to laugh together. We knew this was the right thing to do for our family and that it would bring us closer. And it has.

For any woman reading this, I hope it helps you to know you have options. I want to encourage every woman, especially if you have a family history of breast or ovarian cancer, to seek out the information and medical experts who can help you through this aspect of your life, and to make your own informed choices.

I acknowledge that there are many wonderful holistic doctors working on alternatives to surgery. My own regimen will be posted in due course on the Web site of the Pink Lotus Breast Center. I hope that this will be helpful to other women.

Breast cancer alone kills some 458,000 people each year, according to the World Health Organization, mainly in low- and middle-income countries. It has got to be a priority to ensure that more women can access gene testing and lifesaving preventive treatment, whatever their means and background, wherever they live. The cost of testing for BRCA1 and BRCA2, at more than $3,000 in the United States, remains an obstacle for many women.

Life comes with many challenges. The ones that should not scare us are the ones we can take on and take control of.
Nevertheless, she persisted.
Top

（开个 tasteless 的玩笑哈，Jolie 这么瘦，其实割了之后都未必能看出差别来。）
There was nothing to warn anyone about. The world went on, even as it fell apart, changed irrevocably, became something strange and different. --- "Acceptance" in The Southern Reach Trilogy by Jeff VanderMeer
Top

其实这不是新事物，Ashkenazi 支的犹太女性因为长期近亲交配，普遍携带 BRCA1 & 2 的变异，好多人中年就得乳腺癌，好多年轻女性选择预防性切除。
There was nothing to warn anyone about. The world went on, even as it fell apart, changed irrevocably, became something strange and different. --- "Acceptance" in The Southern Reach Trilogy by Jeff VanderMeer
Top

My chances of developing breast cancer have dropped from 87 percent to under 5 percent. I can tell my children that they don’t need to fear they will lose me to breast cancer.

给智障女儿切除啥啥的事儿，我有模糊的印象仿佛在哪儿听到过，或许是 Law and Order 之类的电视剧，而且好像不是因为基因变异而是别的什么原因（怕女儿怀孕）？
There was nothing to warn anyone about. The world went on, even as it fell apart, changed irrevocably, became something strange and different. --- "Acceptance" in The Southern Reach Trilogy by Jeff VanderMeer
Top

Bravo Angelina Jolie for sharing this!

胸太大确实会造成背痛且影响到锻炼身体。
There was nothing to warn anyone about. The world went on, even as it fell apart, changed irrevocably, became something strange and different. --- "Acceptance" in The Southern Reach Trilogy by Jeff VanderMeer
Top

How effective is preventive mastectomy in preventing or reducing the risk of breast cancer?


Existing data suggest that preventive mastectomy may significantly reduce (by about 90 percent) the chance of developing breast cancer in moderate- and high-risk women (2, 6, 7). However, no one can be certain that this procedure will protect an individual woman from breast cancer. Breast tissue is widely distributed on the chest wall, and can sometimes be found in the armpit, above the collarbone, and as far down as the abdomen. Because it is impossible for a surgeon to remove all breast tissue, breast cancer can still develop in the small amount of remaining tissue.

Never thought I would say this, but here it is: her new boobs look great!

Angelina Jolie has filed for divorce from Brad Pitt, the actress's lawyer has confirmed.
Robert Offer said the actress filed for "dissolution of marriage" on Monday, adding the "decision was made for the health of the family".
"She will not be commenting, and asks that the family be given its privacy at this time," Offer added in the statement.
The couple have been together since 2004 but only married in August 2014.
The couple have six children together - Maddox, Pax, Zahara, Shiloh, and twins Knox and Vivienne.