Prompted by Andrew Cusack’s view of the trailer, here’s my reaction. Firstly, unlike John Mortimer’s peerless 1981 adaptation for Granada, the film is diverging significantly from Waugh’s original dialogue. We hear Sebastian saying “there’s someone I’d like you to meet”, and we immediately know we’re in the scene of Charles’ first visit to Brideshead, and Sebastian’s introduction to Nanny Hawkins. But then we get Emmas Thompson, as Lady Marchmain, intoning “welcome to Brideshead”, and “what form do your pleasures take ?”

As if the “real” Lady Marchmain would inquire in such a direct manner after a new acquaintance’s predilictions ! And then Julia asking “I take it you’re not one of us?” None of the Flytes would be so vulgar as to refer directly to the class distinction between themselves, as aristocracy, and Charles as comfortable London upper middle class. And then the reference to Catholicism - we hear Lady Marchmain inquire “what do you imagine you are doing on this earth ?” There’s a chapel backdrop, and a close up of a rosary to emphasize the theological nature of her question. Again, far too direct ! The Flyte’s would patiently explain in response to Charles’ questions, and refer to questions of faith unselfconsciously, but would never address difference so nakedly.

Venice: I don’t recall Julia being there. Charles and Sebastian visit Marchmain and Cara. No Julia. Nevertheless, there she is with Michael Gambon as louche George Melly style Marchmain. And then we get a brief shot of Greta Scacchi as Cara, warning Charles and commenting on “these romantic friendships”. Which makes me wonder if the other warning from an outsider has been preserved, namely Anthony Blanche’s caution against charm when dining with Charles in Thame.

And then, after the consummation of Charles’ passion for Julia, Sebastian complains “you don’t care about me, all you wanted was my sister”. By the time Charles and Julia realise their relationship on the boat home from New York in the novel, Sebastian is away in North Africa, living on the fringes of a monastery. So this speech is not authentic.

Next, we’re back with Emma T as Lady M telling a society party that it gives her great pleasure to announce Julia’s engagement to Rex. Quite the opposite of the book. “So, you tell me, what does Charles Ryder really want ?”

I suspect Charles, being Waugh of course, would not want this. I’m surprised the Waugh estate sanctioned it, if they did. It seems all the subtlety has been stripped out of the characters and plot, and a hefty dose of tabloid raunch has been injected.

Watching this film is going to be hard work. But I can’t not watch it either.

The gang of TV BR snobs.

The gang of TV BR snobs. 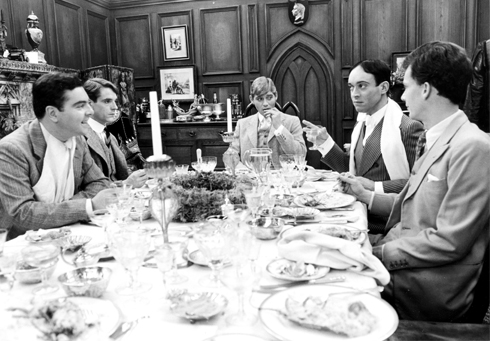 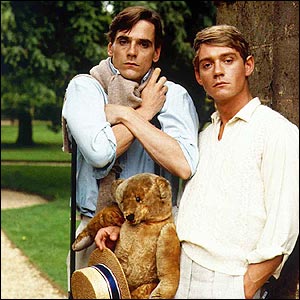 Now that my little one is almost two, my life is also much easier. But I really miss the feeling of holding a tiny infant.

If only I was a magician, if only I could turn my little one into whatever age I want her to be...

Now that my little one is almost two, my life is also much easier. But I really miss the feeling of holding a tiny infant.

If only I was a magician, if only I could turn my little one into whatever age I want her to be...

I wouldn't exaggerate to that degree, my dear. Try Boy Mulcaster

我觉得，恩，what they seeked in this relationship was not sex.
Top